“What will you be voting today Miss Lexi?” “Republican,” a ten-year-old me said with a proud smile, “Just like my mom and dad.”

I was so thrilled to hand in my fake ballad that I remember not being able to sleep the night before. I was too excited. We had just learned a lot about American elections and voting in class. We learned everything from the heroic stories of the American Revolution, to women and African American people fighting their way to the right to vote. It absolutely captivated me. Even at such a young age, I knew in my heart how important it was.

If you follow me, or have read my writing on the Huffington Post over the years, you likely know that my political affiliation transformed pretty drastically as I grew up. I remember taking a political party assessment in my high school government class. I watched my teacher plot every students’ scores on a spectrum written on the board, with my peers’ dots falling moderating in the middle, and my hippy little dot being the outlier on the far left. You see I grew up Republican. I had Republican family and friends, lived in a conservative little town in Pennsylvania and am no stranger to hearing Fox News playing in the background at social gatherings. I grew up in the church too, going to Youth Group every week and singing in the church choir.  Though I grew to strongly disagree with a lot of the beliefs and political stances of the Republican party, I never fell ill-will towards conservatives. I lived and breathed the world of so many Republicans for my entire upbringing, so I understood the life-long factors that influence those beliefs and opinions.

That is until, like many, this election struct hatred into my bones and made me feel more like I was fighting a war than ever. For that, I too have played a role in the insidious disaster of an election that ten-year-old me would be afraid to believe in.

It’s hatred. There’s nothing else to describe what has fueled all aspects of this election other than a pure, unadulterated hatred. Even if you started out trying to fight against the hatred, it gets to you in one way or another. It’s sunk into our hearts and made us angry, and now we can’t escape it. It’s like a fire with the two opposing sides on each end tossing wood on to the pile. Neither will surrender and stop fueling the flames, because they can’t let the other win. They don’t even know what they’re fighting for anymore. They don’t even notice that the land and home around them is burning at their feet.

There are so many parties to blame, but let’s begin with what I believe to be the most obvious of them all — Donald Trump. Say what you want about Secretary Clinton, (Killary, Crooked Hillary, or whatever other names the Trump campaign has coined) but she’s been in politics for decades and it’s never been the mud-slinging, Twitter battle travesty that 2016 has presented. Though her campaign has by no means been innocent through all of this garbage, I’ve been watching Hillary campaign since she ran against Obama in the primaries in 2008 and because nothing about that display sucked the patriotism out of my soul,  I’ll start with the introduction of Mr. Trump into politics.

Trump has used hatred as a legitimate strategy to become the Republican Candidate in a Presidential Election. I think even Trump Supporters understand that to some extent.  It’s true. Trump’s messages have worked their way into the most vile parts of American fear. He’s breed prejudice, xenophobia, sexism, racism, religious discrimination and an entire laundry list of awful, despicable human traits that should only exist in those history books I was reading when I was 10. The worst part is– it’s worked. And if it didn’t dig out the wretched dirt of the human mind that inspires blaming and judging groups of people, he played on making them hate their opponent. Hilary and her supporters have done this as well, more so than she has done in the past. We’re all pretty guilty. Often for good reasons, but still, collectively guilty. We’ve become divided, hurtful and angry people. Don’t believe me? Let’s take a look at some examples. 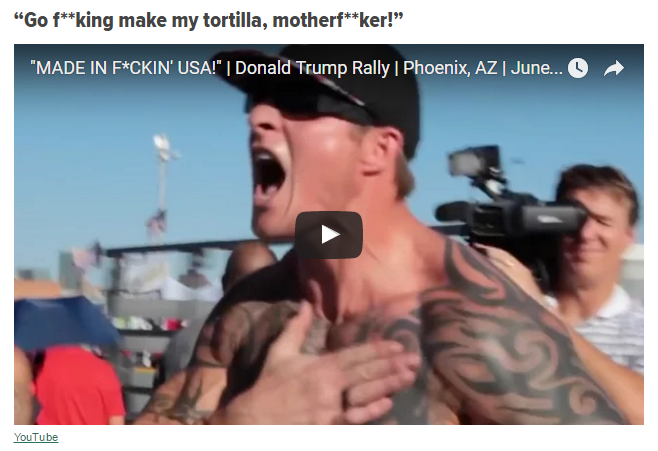 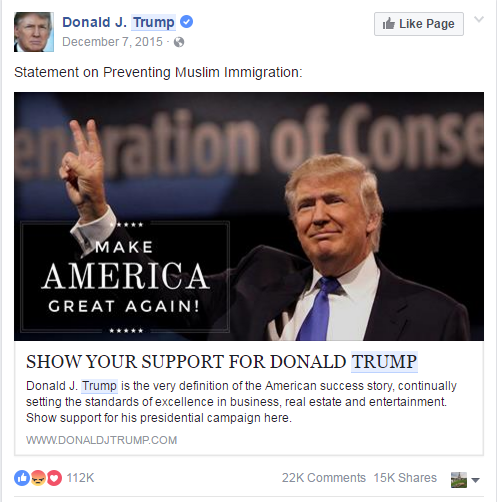 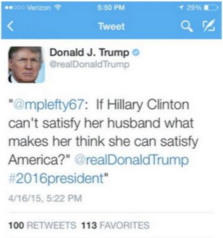 Lastly,  Republicans and Trump Supporters too have been lumped into a group that receives a lot of stereotypical ridicule. 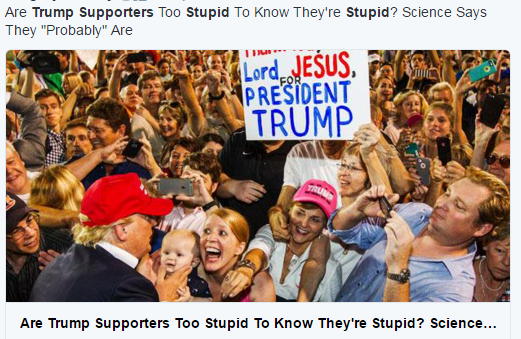 And the list goes on and on. There are no words for the hatred. It’s quite literally gone viral. But as mentioned above, it’s not just Trump and his supporters at this point– it’s all of us, even those of us who say we hate the hate.

Social media feeds are infested with arguments and frustration. The rallies are violent and treacherous on both sides. The things we say to each other have reached new levels of opposition and transcended into divisions we may never recover from. We want to stand for our beliefs and hold our values true until the very end, but is our ‘Facebook Flight’ making an impact?

I’ve never hated a political figure. I didn’t vote for Mitt Romney in 2012, but I certainly didn’t hate the man. I respected him as a candidate and chose to vote against him. I didn’t look down upon people who voted for him. I didn’t aggressively try to change their minds. I didn’t feel anything other than disagreement. But now, everything is so different. It’s different for all of us because of the mess this has turned into.

This election has made me hate people. I’ve unfollowed countless people I grew up with. I’ve even read posts from friends and family, who I respect and care about, and found myself losing those affinities in spite of my best efforts to remain objective. This election has become so treacherous and personal that the posts, opinions and stances I see shake me at my core. It’s changed my opinion about people I once respectfully disagreed with. It’s made me angry about a right that used to thrill me. Hell, supporters have actually posted about taking away that voter right I yearned for as a young girl and deserve to have. The Republican candidate is a reality TV billionaire that thinks it’s OK to grab women by the pu**y. The two political candidates throw shade at each other on Twitter as a legitimate political strategy. For hell’s sake, of course I have been angry.  I’ve been offended and disgusted by so many things, and that’s changed me throughout this whole mess.

This election has done this to a lot of people. The problem is that we keep talking about it, and the more we share, the more this nightmare grows.

I’m not angry anymore. At this point, I am just sad. I’m disappointed in the behavior of this country and its candidates.  A few weeks ago, I spent some time in Europe and heard how much of a sad mockery this election has turned us into. We look foolish to other countries, and in a lot of ways we are. I know I have been at times. Our response as a nation is what has been foolish. It’s been the driving factor behind so much that’s happened in the election, but it’s almost over. The only thing we can do now is try to change the conversation.

Stop sharing negative, hateful political commentary on social media. Others still will, but you don’t have to react. Ignore it. Don’t allow yourself to get pulled back into an exhausting cycle that has ignited each step of this election. Walk away. Break free. End this the right way.

Cast your ballad with the same dignity and pride a ten-year-old would when first learning about this country. Don’t let the fuel keep getting tossed into this never ending fire. The land really is burning around us, and we’re the only ones who can put out the flames.

To find out more about positive social sharing, visit our #ShareWhatMatters page and join us in the movement towards meaningful social conversation.

What are your thoughts on the election and how that has affected your perception of others, this country and yourself? Let us know in the comments below, we would love to hear your perspective.

11 Things We Fake In Our Social Media Lives

14 Things No Young Woman Should Ever Have To Fear

34 Ways You Change As You Become An Adult