It’s incredible how brief encounters with strangers can come exactly when you need them. And then turn your perspective over on its side like a cross-fit fanatic flipping a giant tire.

You find these experiences almost anywhere; in the line at the store, on a bench at the park or even in a crowd at a concert.

For me, it was a flight from Paris to New York City.

I’d begrudgingly caught a train from London at dawn, power-walked through security at the Orly Airport and made it to my gate just in time to buy a bag of gummy worms and a massive water bottle. When I got to my row it looked like the seat to my right would be open, so I started to pile things on it as time ticked closer to takeoff. But soon a man with gray Einstein-resembling hair and warm eyes came stepping through the aisle like a person that arrived late at a movie.

He smiled and I introduced myself. He told me he was a professor at NYU and cracked a few jokes. Somehow, despite utter exhaustion, droopy eyes and messy hair tucked into a ball cap, my curiosity couldn’t keep me from asking more. Before long, we were chatting away.

We started with stories from our travels. We laughed and I flung my hands around excitedly telling him about my adventures.

Then we moved on to the basics of who we were: where we were from, our families, what we did for a living, and finally, what brought us to New York City.

This particular question struck a nerve in me that my face couldn’t hide. We’d been talking for a while at this point, but he was still a stranger. And yet in that moment, he looked at me like a long-time friend.

“I can tell that you know pain.” He said definitively.

He must have seen how taken aback my expression was, but he continued.

“You’ve seen how hard life can get, and yet you choose to live it anyway. You know great hardship, but also choose to celebrate joy. That’s how it should be.”

These statements hit me right in the chest. They cut through me like I hadn’t allowed words to in a long time. With that, I started to tell him my story. It was so fresh in my mind at that point. The words and emotions came spilling out of me like a rushing river of confusion.

I talked to him about the obstacles, the moves, the loss, the heartbreaks, and the changes that had somehow led me to where I was that day on the plane. At the end of that discussion, I made a comment along the lines of the title of this story.

“My life plan has pretty much gone to shit.”

With that, he smiled, and pulled out a legal pad he’d been sketching mathematical equations on at different times throughout the flight.

“When you’re young,” he said pausing playfully to emphasize my very young age, “You think your life is going to look like this– like a straight line.”

He draws an arrow at the top of the paper and continues. 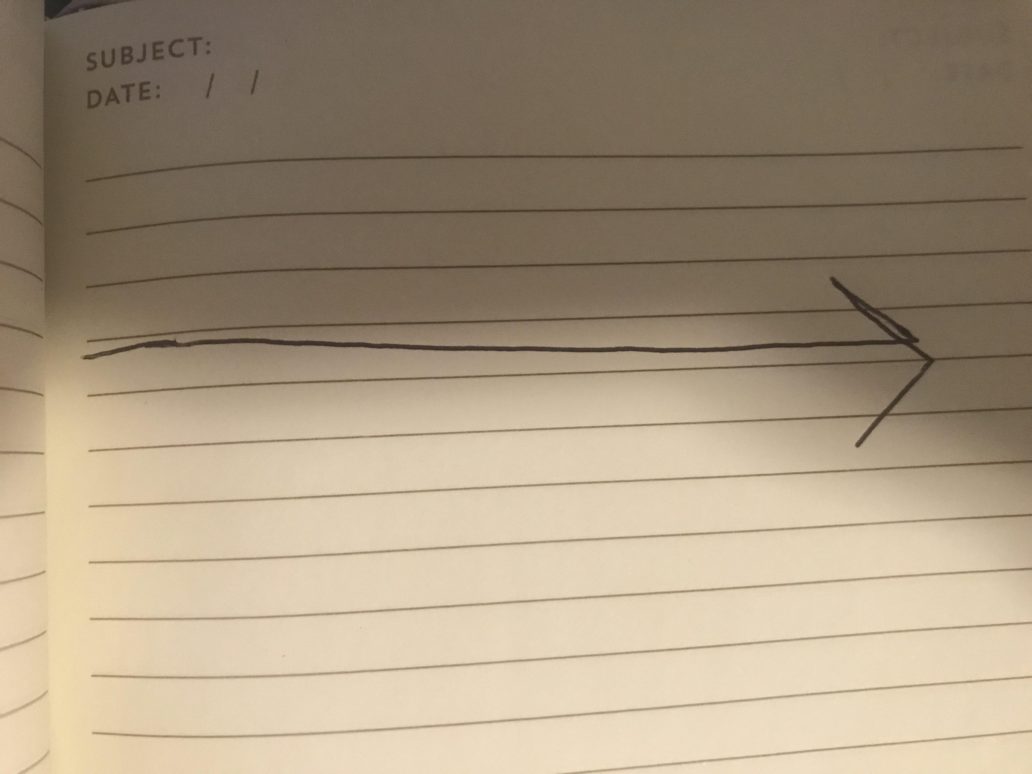 “You’re idealistic about your life and what you think it should be.”

“Then you get older.”

“Things start to happen, and you realize that it looks a lot more like this.”

He draws a second arrow, but this time moving the pen in all directions. 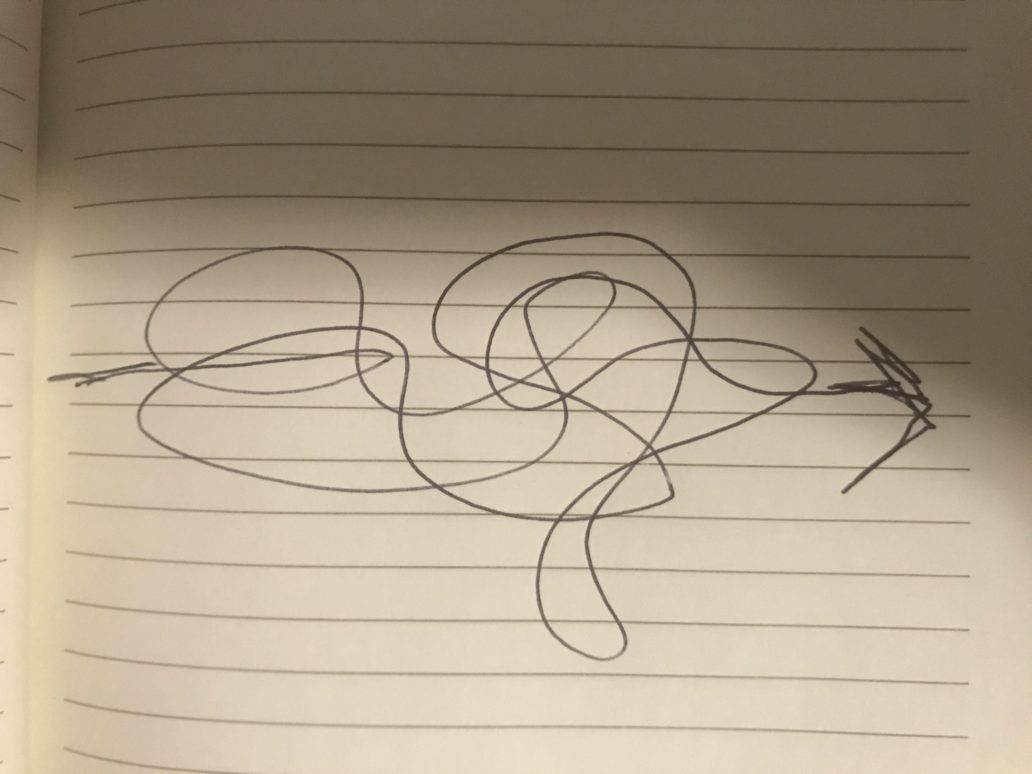 “This,” He says pointing to the squiggly part of the line, “This is where you find out what you want and who you are.”

We went on to talk more about all the changes and shifts he too had encountered, and how they ultimately led him to understand who he wanted to become. We talked about career, passion, loss and growing pains. He had a daughter my age in a situation similar to mine. He had friends that went through even more abrupt changes.

“There’s no such thing as a straight-line plan. There isn’t supposed to be.”

I want to share this story for every other person out there looking at their life and wondering what the heck happened to their line, their plan.

You all know what I am talking about; the plan. The one you perfectly crafted with unrealistic deadlines and expectations that could not have possibly taken into account all that life was going to throw at you.

It’s the plan you think everyone BUT you must be following perfectly.

It’s 8-year-old you cutting out photos of brides in wedding gowns and pasting them into a scrapbook. OR 12-year-old you giving a presentation about your “future career” as a thriving veterinarian. OR even 22-year-old you, on the cusp of college graduation thinking you’re about to step into a beautiful fast-track to the success and lifestyle you always wanted.

But girl, that isn’t how life works, and it’s not your fault.

Sometimes the man you thought would be standing beside you in that scrapbook turns out to be a dirtbag.

Sometimes the career you thought you were perfect for actually makes you miserable.

Sometimes the major you thought you’d study in college doesn’t work out because you can’t pass calculus.

Sometimes the place you dreamed of living your whole life is smelly and busy and full of people who spit on your shoes.

Sometimes you don’t get married by 25, or pregnant by 30. You don’t graduate in 4 years. You don’t move out of your parent’s house at 22. You don’t get promoted to VP by 35. You don’t pay off your student loans in 5 years or buy a home in 8. Sometimes nothing happens AT ALL in the time you thought it would.

Here’s the truth: No one really gets their perfect plan.

But honestly, why would we want to?

I don’t want the me’s of years past to dictate who I thoughtfully strive to be now. And you shouldn’t either. Just because you at one time had a vision of what your life was supposed to be, doesn’t mean it was correct.

Just because Becky on Facebook seems like she has it all together, doesn’t mean she actually does. We are all brilliant architects of falsities when it comes to social media. But even if Becky does have everything she’s ever wanted, good for her. Go Becky.

Your life is YOUR life. Not anyone else’s. Your plan in YOUR plan alone, and it has not gone to shit, it’s just changed course.

Because that’s what life does.

It squiggles. It jerks you all over the place, sometimes for the sheer sake of teaching you and making you strong enough to conquer the next step. It takes you one way and then says WAIT NEVERMIND and takes you another. That’s the whole freaking point.

We aren’t characters in a novel with a carefully crafted narrative from start to finish. We are human beings. Messy, unique and tremendously worthy of our own special pieces of happiness.

So don’t just endure the squiggles, revel in them. They ARE your plan.

And when life gets you down, and you start to feel lost in the squiggles of life, remember the words of my favorite airplane stranger:

“This is where you find out what you want and who you are.”

That sounds like a good plan to me, doesn’t it?